“I think the main task in life we all have received, is to become the best version of ourselves, no matter how difficult life can be. ” King Harald V of Norway

Det kongelige slot, or simply, Slottet is the royal residence home to HM King Harald V and HM Queen Sonja. Slottet is located at the top of Karl Johans gate, completed in 1849.

The Royal Palace Park surrounds the palace on all sides and features grassy areas, majestic trees, small ponds and statues. These grassy ares are perfect for a quick picnic/ hanging out in front of the castle while admiring the majestic neo-classical style with the facade of stuccoed brick. 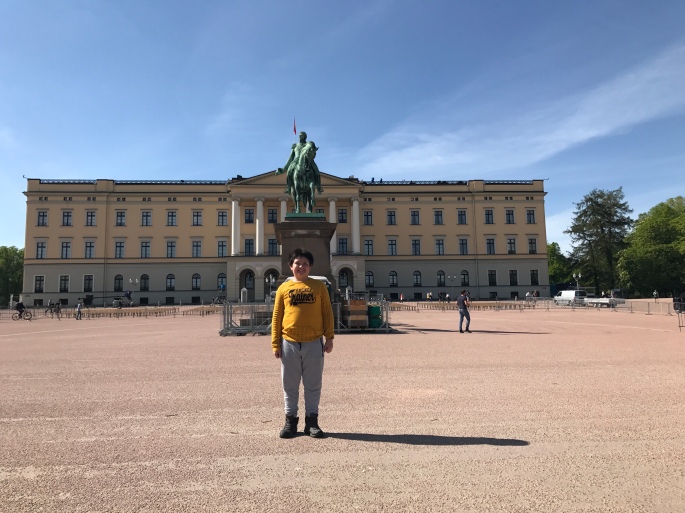 Beyond hanging out during sunny days (or any cold days!) there are tours in summer, changing of guards every 1:30pm and service in the Palace Chapel every Sundays at 11am.

Our family believes the King Harald of Norway is THE coolest monarch. He is a champion sailor; he represented his country three times in Olympic Games; he support all genres and religions.

Not so long ago, he quoted Love Actually, in comparing Norway with United Kingdom,

“We may be a small country, but we’re a great one…”

He is certainly has more right to state this than Hugh Grant.

If you don’t think that is way too cool for a monarch, you should hear the love story between King Harald and Queen Sonja.

Once upon a time in 1950s…. so the real fairy tale starts King Harald saw a commoner, love at first sight, chased after her, courtship of nine years! King Olav V disapproves of the Prince not marrying another royalty from Sweden, a country of alliance. They defied all odds and eventually got married and live happily ever after ruling a great country… making it greater every day…

Obviously, lots of positive energy around The Royal Palace that our family wishes to absorb. And really, it’s a fine place to visit!

Don’t miss passing through The Royal Palace when in Oslo, Norway!

What We Think Really